I spend hours on end sat in Ollie’s room, sometimes listening to Ollie’s playlist and thinking about what used to make him and us properly laugh together. He liked songs like the Phil Collins track In the Air Tonight, which he called ‘the monkey song’ because of the television ad it was used in. Not surprisingly for a five year-old with a sense of fun and mischief, he also loved television programmes like Total Wipeout and You’ve Been Framed. But the easiest way to convey the true sense of Ollie is in photos. These are just a few personal favourites of many precious times.

Ollie was a mini me, he was the dead spit of me when I was little, right down to the chin! 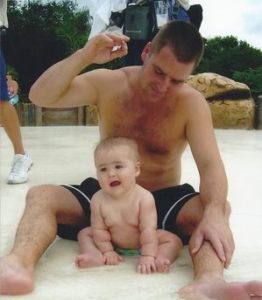 He was Daddy’s boy, my shadow. He’d sometimes come to work with me during the school holidays and once during a job when he asked how I got my money, I told him that I built people’s extensions and then invoiced them when I had finished. Later that day as I was tidying up and he was happily pottering around, he knocked on the old lady’s door and said “I’ve done my job today, so can I have some money please?” I apologised but she said “bless!” and gave him £1 from her purse. He was so excited, he came running back saying “Look Dad! Look Dad! A pound!”

It is one of the days which will stick in my head forever, not least because I used to do exactly the same with my Dad, too.. 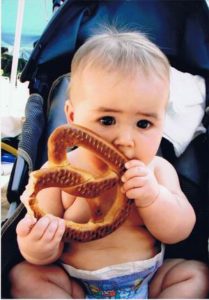 Another favourite photo, just look at his lovely chubby arms and legs. He was only 6 months old here and we were at Disneyland in Florida.

He didn’t like the heat much but he certainly loved the food. That pretzel was almost as big as he was! 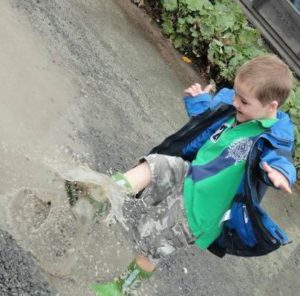 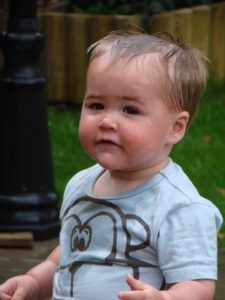 Right from a baby, Ollie had a fascination with water. Bath, sea, pool, anything, The first picture here was taken just after he’d dunked his head in a puddle on the ground! In the second one we are in Wales, just look how much fun he is having with that puddle there.

During his last summer we watched him for ages at Lyme Regis, just standing at the waters edge and staring out across it, unlike most little boys who be throwing stones into it, or something similar. He just stood there in deep thought, just sucking it all in. It was freezing cold but as a wave came in he just bent forward and dipped his head right in!

Just a few days after his diagnosis at the John Radcliffe hospital, he went for his biopsy. Just beforehand the surgeon came round with his team to explain things to him and they asked if there was anything he’d like, bearing in mind he might not wake up from it. Ollie looked at him and said he’d like a bath. The whole team just melted. The surgeon told the nurse to run it, saying “we are going to delay things by 15 minutes.” Alfie jumped in it with him but we all managed to come out absolutely drenched!

He used to do that in Helen House too, he’d lie in the shower bed and just grab the shower hose and soak everyone in the room. Helen & Douglas House is a place of smiles and laughter and we’ll never forget his belly laughs during those times. A good day for one of the care workers there is getting a smile out of a child; I think Ollie’s care team had a lot of job satisfaction with him. 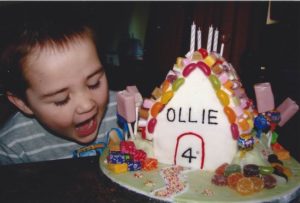 Ollie loved his sweets, like most kids. A couple of years back we went with several other families to welcome the mums who were doing the London-Brighton cycle ride. We stayed on a campsite in Brighton; 7 dads, 13 kids and 2 dogs! We were safe inside as there were electronic gates to the campsite but we told the kids to stay together and they had a great time running around as we set up the tents. But Ollie went missing and we just couldn’t find him. My heart was sinking as we checked all the tents, all the cars, shouting his name and asking the other campers. After about half an hour and on the verge of tears, I got my phone out and dialled 9, then another 9 and had just got to the third 9 when a lady came over and said that she’d spotted him in the back of my car. I’d already looked inside once, but there I found him, hidden in the boot underneath some jackets with a packet of sweets!

Everyone discreetly disappeared while I gave him the biggest cuddle, crying with relief all over him. Then I said “enjoying those sweets?” “Yes.” “You eat them all. Have them all. But don’t EVER do this to me again!” 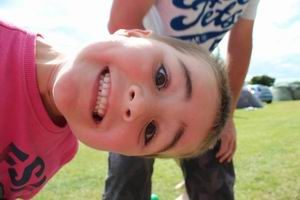 This would have been his last summer holiday. I can’t even remember what we were taking a picture of, but he managed to get in it and be a cheeky monkey.

He had a habit of doing things like this when you were trying to take a photo, he never smiled for the camera properly, he would always pull a face or shut his eyes or something like that. But that was my boy! 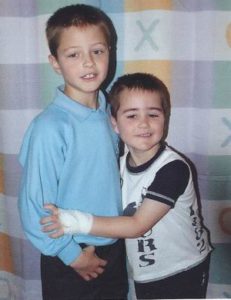 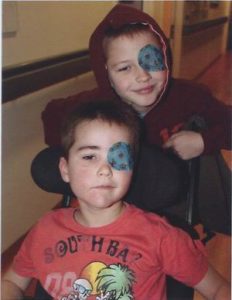 Ollie’s eyesight went early on during his illness. The doctors at the John Radcliffe insisted that he wore an eyepatch while they made him some glasses. So Alfie decided that he would put one on, Tigger his teddy ended up wearing one and Sarah and myself too!

Alfie was only 8 years old then so it was a really thoughtful thing to do. But then, he was very thoughtful throughout. He looked up at the stars and said to me one night as we were driving back home along the M40 in the early days, “Dad, is Ollie going to become one of those stars in the sky?” Alfie has been obsessed with stars since and he has even chosen one for Ollie in the sky, which we try to find every night. That’s also why we have the star in the Ollie Young Foundation logo.

Ollie was always happy to catch up with Alfie after a couple of days in hospital, and to be able to give his brother a cuddle. The photo on the left is in the early days at the John Radcliffe hospital; he was still able to stand on his own then, albeit hanging on to Alfie a bit. Within days he was in a wheelchair, the illness really did get him very quick.

Alfie is really proud of his Ollie Young Foundation top and he has been very much involved in the fundraising, baking cakes to sell, making his bookmarks in Helen House and selling them to all of the staff there, even Sister Frances! He was one of the first to help and come up with ideas of things to do. He was a very proud brother. And I’m so, so proud of him too.

Ollie and another child at the John Radcliffe were asked to decorate the Christmas tree. He’d walked in there only a few days before but see how much he had deteriorated, he was completely paralysed down one side. 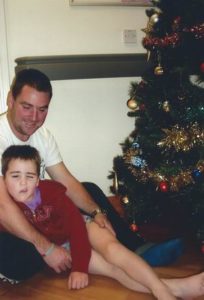 He still had his full body weight though, so it was quite an effort to keep picking him up to decorate that tree! But he certainly gave it a good go and when his Mum came in it was a proud “look what we did!”

All the time we were in the JR in early December he kept requesting his advent calendar, but he had to wait every morning until all his checks, medicines and obs had been done, many of which he did himself. He was always after the chocolates. One of the first jobs I was given after he was admitted on the 1st December was to go home and get it!

This was taken on the day Sarah and I were married at the church next to Helen & Douglas House, on December 17th.. It was Ollie’s dearest wish and amazingly, the whole wedding was organised in less than a week! 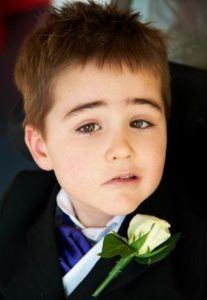 Just take a look at this photo of him on the day and tell me how I couldn’t be the proudest dad in the world.

It was just two and a half weeks after his diagnosis and we had been told that he probably wouldn’t even see this day. But as you can see, he was still with us and he was beautiful.

It was the proudest day of his, mine, Sarah and Alfie’s life. Ollie just smiled his half-smile all day on the side he could still move. He was paralysed down the right hand side of his face and the left hand side of his body. But as he sat there in his wheelchair, dressed the same as me, his thumb kept coming up and he kept on smiling. He had two full time carers, making sure that he didn’t eat or drink anything he shouldn’t because he could very easily have choked to death and he just couldn’t swallow properly.

But he was as gorgeous as ever. There are no words that can describe this photo. Just take a look. 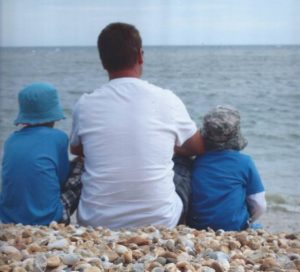 I would so love to see Ollie again. As I see Alfie growing up and Ollie’s friends too, I can’t help but think about him and where he would have been now. I feel that there is a massive, massive part of me that has gone.

I love you and miss you little man, more than I can ever say.

The Ollie Young Foundation is run entirely by volunteers, with minimal costs.